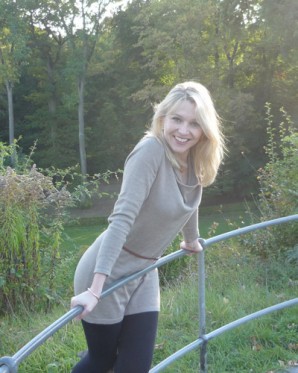 Mirjam Seling was born in 1979 in “Snow White City” Lohr am Main in Lower Franconia, Bavaria. It is considered that Lohr am Main is the historical site of Brothers Grimm’s fairy tale. So maybe vivid imagination and creativity was somehow put into her cradle.

From early childhood, Mirjam has been a creative mind, which she believes she inherited from her paternal grandfather. She developed a passion for painting and crafts and although her time to be creative is very limited today, she still enjoys it a lot.

Regardless of this passion, after graduating from high school, she decided to go into a much different and hardly creative direction, by studying economies and law. As she enjoyed living in a big, pulsating city, she made Frankfurt am Main her new home. Mirjam lives here with her boyfriend.

Mirjam does sports like running and Zumba, and she loves to meet her friends and explore Frankfurt. She is passionate about photography, her orchids, going to flea markets and shopping. In fact, a shopping trip with one of her best friends was the moment she got addicted to Trollbeads.

“I was combing through the earrings in a department store in Zurich. Sunken in the variety of jewelry, I asked for her opinion, but received no response. As I turned around, I saw her standing a few stands away, calm and thoroughly compiling her first Trollbeads bracelet. I tried to be brave and kept telling myself “you don't need to have everything your friends have”.

It took me only a few days until I decided to “just take a little look” at a local jeweler. I left the store with a silver bracelet, Blue Desert, White Diamond Bead and a silver Cherub with flower/pearl lock. That was in 2009. I still remember the sales girl telling me about a woman who filled an all-new bracelet within just one week. “Where is the appreciation of a new bead for a special occasion once you fill a bracelet so quickly?”, I asked myself. I should soon find out. Five weeks later, my bracelet looked like I had a birthday every week, celebrated Easter and Christmas in between, married three men, and given birth to four or five children.

I noticed that I do not need a special occasion. My general passion for crafts, creativity, and jewelry just rubbed off on Trollbeads, as it addresses my own creativity by allowing me to bring in my own ideas and design my own sets. Sometimes, when I look at my beads and start dreaming about new designs, I can feel the brief escape into a world of trolls and fairy tales again. And it makes me happy.

The inspiration for my contribution to People’s Bead 2014, Perfect Balance, was to create a bead with basic colors that fits with various combinations. The reason I like Yin & Yang so much is the story and meaning behind it. According to traditional Chinese philosophy, the interaction of these two opposite but complementary forces makes up all aspects and phenomena of life: night and day, man and woman, life and death, hot and cold, and so on. Their balance maintains the harmony within the universe. “